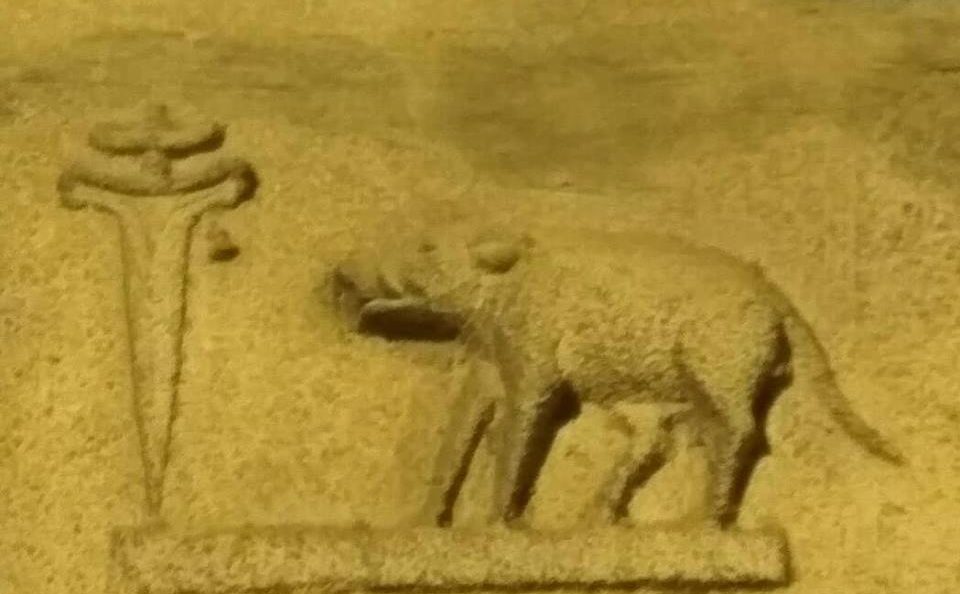 Finally, I found out why those carving are depicted in most of the gopuram(monumental gatehouse tower) in the way towards to worship #lordvishnu situated in the top of the hills Venkateswara Temple, Tirumala, Tirupati.
This carving Contains #lordvaraha (Boar) 3rd avatar state of Lord Vishnu and also Dagger in front of it.
We already know Lord Varaha in Vishnu temple denotes another form of Lord Vishnu. But Why? the dagger carved in front of the boar?.
So I searched the temple history on the internet. Data are not exactly informing who built this temple. But earlier temple history depicted #tamil #pallava queen Samavai in the year 966 CE donate the considerable amount of jewels and land to enhance temple growth. Great dynasties who ruled south India where maintained and developed this temple.
Notable dynasty is The #pallavadynasty(9th century), the #Choladynasty(10th century), and #Vijayanagarapradhans (14th and 15th centuries) were committed devotees of Lord Venkateswara. Temple achieved its peak at the rule of Great Vijayanagara Emperor #Krishnadevaraya in 1517.

Seekers, in this slide you can see flag contains Boar, dagger, sun and crescent moon this symbols in the royal flag belongs to Vijayanagara dynasty.

This symbol Boar to Lord Vishnu they are keen worshipers of Lord Vishnu, Vertical Dagger facing downwards represent their royalty and pride(My thoughts: Dagger denotes “I pledge my sword to Lord Vishnu”), the sun god and moon crescent of Shiva. This Great Royal emblem carved in walls of temple gopurams located in the way towards worshipping lord Vishnu they were 5 megalithic gopurams from bottom to top.

Vijayanagara kings built those megalithic gopurams also carved their royal emblem in it. To Display their honour and strong worship to lord Vishnu .you only find Boar and dagger symbols in those gopurams two reasons for that

1. They changed their symbol in a later period of time
2. Visnu temple so they only depicted Boar and their royalty.

Also, these gopurams are more useful even today it is a good restful place and provides shelters for those pilgrims who walk towards top via the footpath to worship #lordvishnu

Thanks for reading!!! 🤗
“Believe In Force”

One thought on “Royal Emblem of Vijayanagara Emperor”